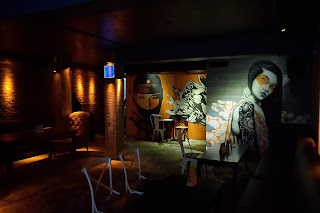 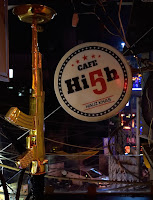 Café Hi5 reopened this year and buzzed the market with a new menu and expanded place. The interiors are quite cool with funky graffiti on walls and ceiling. The cafe has separate space dedicated for private parties, match screenings, DJ and usual diners. Music was excellent. Credit to the DJ who did not stick to the usual Punjabi songs but played kicky foot tapping numbers.

We started with paneer tikka, chicken lollipop and fish tikka. Paneer was fresh and not greased with oil. The good thing about the whole experience was that management was open to feedback and ready to improvise. The manager sat with us and tasted paneer tikka when I told him about high salt content. Chicken lollipop and fish tikka were well marinated and soft, juicy from inside. The nice smoky flavor was appealing. Papad & Mint chutney accompanied the dishes. The spread had a great presentation.

The manager showed us the whole place. The showstopper was the bar and they claim that to be the only one in India with tap bar! Take a look at the picture!


Chef's own innovation -Juicy Jullian came to us when we asked for a non-aerated mocktail. It was a mix of crushed pineapples, orange juice, mint leaves and sweet lime slice. Mind you, there was no added sugar in the drink. It felt extremely good and refreshing. Italian Smooch is another refreshing mocktail to watch out for. Peachy, minty and no sugar, the drink is a perfect summer cooler. I highly recommend the drinks to all mocktail and non-alcohol consumers. 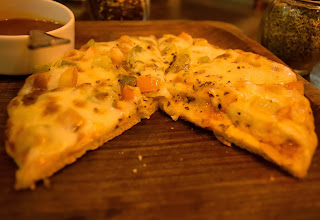 We scanned the whole menu for something interesting and ordered thin crust veg pizza on manager's recommendation. I sipped Nutella Hazelnut Shake in the meanwhile which was filling and good. Loved the perfect crispy thin base of pizza.  Unlike the usual pizza, this was not overloaded with cheese!  Cheese topping on pizza was fresh and it was not high on salt either. 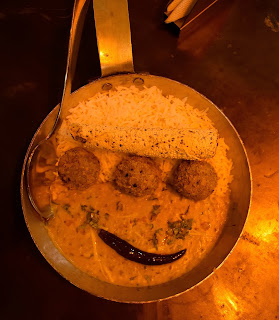 The manager insisted us to try a dish named “Dal chawal beyond imagination”. The dish lives up to its name and gets a standing ovation from us. Now who would have imagined spotting daal chawal in a hip hop café menu? With the first bite of it, our appetite multiplied and our curios minds jumped out again asking about the masala of it. A simple yet delicious arhar daal and steamed rice with crispy fried potato balls and papad was an out of the box experience! So we now know where to find good healthy home cooked food in Hauz Khas.

The concept behind designing such a dish is to provide economical meal for a single person or twin sharing basis, since it is difficult to find home cooked traditional simple food in cafes.

With tummy almost full and guilt tugging at health consciousness within ourselves, made us try the ceasar salad which was a mix of assorted veggie leaves, lettuce, olives topped with mayonnaise. It turned out to be a bad choice as we left more than half of it uneaten. It wasn’t good. Anyway, the last thing we tried was brownie. It was no different than a piece of overtly sweet black forest cake. I was a little disappointed since a brownie is light and non creamy that melts in mouth. But the presentation was nice. It was a compensation for the ceasar salad.
at May 21, 2016 2 comments:
Email ThisBlogThis!Share to TwitterShare to FacebookShare to Pinterest
Labels: Cafe in Hauz Khas, cool South Delhi hang out place, eating joint, lifestyle, review. 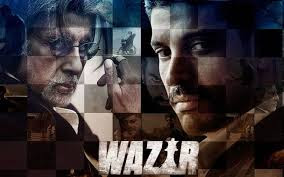 Wazir is one of the most talked about thriller films in Bollywood and the screen presence of Big B Amitabh Bachhan with super talented Farhan Akhtar gives you a reason to watch it. The duo feature in unique roles like never before. O yeah that’s intriguing enough.

As the name suggests, this thriller plot is based on a chess game where the pawns represent the characters. No, the movie does not revolve around the game of chess or but on dirty politics and corrupt thoughts that the characters portray, just like one does in chess.

The plot- The protagonist Pandit Omkar Nath Dhar (Amitabh Bachhan) is a wheelchair bound grand chess master who lost his daughter in an accident. Deep down in his heart he knows the killer of his daughter but is unable to avenge him because of two reasons- Lack of concrete proof and his disability.

The second character Daanish Ali (Farhan Akhtar) is a high ranked cop in the anti-terrorist squad who is married to Ruhana (Aditi Rao Hydari). The couple lives a happy life with their cute six year old daughter Noorie. In an unfortunate accident, while chasing a terrorist, Noorie gets shot and dies on the spot. A grief stricken Ruhana blaming Noorie's death on Daanish, gets separated from the latter, refusing to see him.

A devastated Daanish promises himself to avenge the death of his daughter. He finds confidante in Pandit Ji and as both share a common thing – grief of their dead daughters. In their unique friendship, Pandit teaches chess to Daanish and narrates to him how he had lost his own daughter Nina. Daanish is intrigued by Pandit's story and promises to help him find Nina’s killer. The suspect Minister Quereshi holds the story in the second half. The hunt grows messier and shocking truth gets murkier as reality unfolds.


Character analysis-
Needless to mention, Big B outshines and Pandit’s character is unbeatable. Farhan Akhtar gives his hundred percent in every role. The intensity and the hard work in his performance clearly shows on screen. This is Akhtar's another commendable performance after Bhaag Mikhaa Bhaag. From an officer on duty to a father mourning his daughter’s death, Farhan’s shift in expression and body language is superb. He is superb as the new age actor.

Aditi Rao in the role of a classical dancer and perturbed mother, justifies her presence quite well. I surely would love to see more of her classical dance moves. John Abharam adds just the right amount of spice in the climax. What’s more- Neil Nitin Mukesh is a surprise character, who is slyly named Wazir. Why slyly? Well, you gotta watch that for yourself!

Cinematography by Sanu Varghese is brilliant, giving an excellent angle and feel to the story.

The plot is promising and very well executed. Yet the punch of spice unlike in fast paced thrillers is missing. The climax was a little over the top and not out-of- the-box. Could have been better!
In many a places, the story was kind of predictable.

The songs are excellent and enjoyable. In fact it was the song "Atrangi Yaari" that made me watch the movie. (But it does not feature in the movie). Kudos to Big B abd Farhan for singing, considering their talent and energy they have always displayed for audience. A special mention of Ankit Tiwari, Shantanu Moitra hence!

Rest, the songs are not disturbing, performance was excellent and in a true sense a potentially great thriller.

Spoiler- If minister Quereshi could kill Nina, he might as well had killed his own daughter and easily fabricated it as an accident. Sympathies would still remain with him. No? 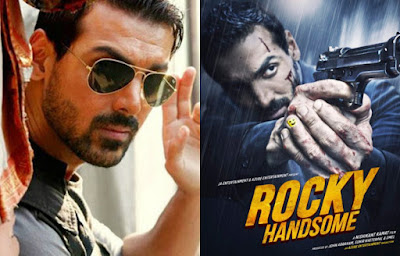 In the quest of good action packed movies, I landed up watching the no-so-handsome Rocky Handsome. Not to forget the credentials of the Bollywood hunk and once a heart throb, John Abraham, who pulled the crowd but disappointed many like me. After garnering lot of attention in Madras Cafe and producing a successful movie like Vicky Donor, John Abraham raised the expectation level of audience a notch higher, however Rocky Handsome falls much below the bar.

The plot-.  Heavily borrowed from South Korean action thriller “The Man from Nowhere”, the plot is around an ex special force agent Kabir Ahlawat (John) trained for covet operations living alone in the dingy lanes of Goa. After losing his pregnant wife (Shruti Hasan) in a terrorist attack, his service records are deleted and he runs a pawn shop from his house.

His drug addicted neighbor Anna (Nathalia Kaur) is a single mom with a 7 year old daughter Naomi (Diya Chalwad) and the latter is often left alone in the house. Expressionless most of the times, Handsome (as his nickname) is a silent protector and companion to Naomi. There is an unspoken and caring bond between the two. She finds a friend in Handsome and keeps visiting him while the latter feeds her and lets her sleep in his house, while Anna gets wasted in drugs.

During the gradual up-rise of drug mafia& child traffickers in Goa, Naomi's mom dies of drug abuse and Naomi gets kidnapped by a child trafficker. Handsome crosses all huddles, goes on a killing spree to rescue the girl and busts the whole racket all by himself.
The movie ends, of course with her rescue, dead villains and frustrated audience like me.

Reaction- The pot has nothing new to offer. Most of the characters were misfit and badly portrayed. Well, villains also have a larger than life personality, if not scary. Characterization of villains is irritating and overdone. The only saving grace of the movie was the martial arts sequence in the climax when Handsome and a bad guy fight. But seriously, who will sit through the entire movie to see a fight scene?
The first half seems to be lifeless, slow and too dull. The pace picks up in second half, just because it had to justify the action sequence on which the movie was based. 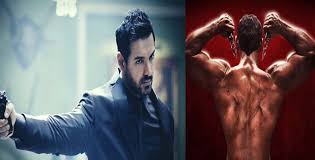 Too much of bloodshed, violence, nudity and crime but all unnecessary, unwanted, forced fitted.
Too less of good performance, substantial content, emotional hook. Not even good songs!
With a funny movie title but intriguing promos, the audience might be bent to watch this badly made movie. Oops, even John's wrestler like body could not hold the audience. Nishikant Kamat thought at least fight scenes would be a great hit among the masses. Unfortunately that wasn't the case.
I can only give two stars for the last fight sequence in the climax of the movie. Does not deserve more than that.
at May 02, 2016 No comments:
Email ThisBlogThis!Share to TwitterShare to FacebookShare to Pinterest
Labels: action, child trafficker, drugs, Goa, maafia, martial arts, movie review, organ harvesting, Rocky Handsome, The Man from Nowhere
Newer Posts Older Posts Home
Subscribe to: Posts (Atom)