Kite flying is an art, which was been practised since ages in India. The art was initially an entertainment that later took the form of competition and was quite popular among children. Not only the rural but the urban places too saw kite flying as a sport, especially during occasions like Raksha Bandhan or Janamashtmi.  With the changes in lifestyle, the art of Kite flying started losing its fame. Lack of time and open spaces,  contributed towards a major decline in this graceful art. Left with few buyers, the market of kite makers also started shrinking.

A Kite Flying fest was organized for two days i.e. 12 and 13 Nov’11 at India Gate lawns. An initiative like this has helped many people relive that golden time when flying kites was the best pass time. 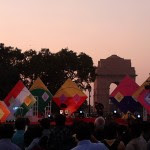 The sky above India gate lawns was dotted with colourful kites on the first day of the fest i.e. Saturday, 12 Nov’11 post noon to dusk. Kites of unusual shapes and sizes soaring high in the sky was a visual treat. Organized by Delhi Tourism in association with Shahjahanabad Redevelopment Corporation and the Department of Art and Culture, this was an effort to revive the culture, which has been losing its popularity. Inaugurated by Chief Minister Sheila Dixit, she set the adrenaline gushing for all kite flyers by flying a colourful string of kites. The 20-foot string attached to the ground marked the festival symbolically.

Ranging from variety of colours and shapes, one could see a giant Hanuman kite to a Hercules size Spiderman Kite. There were stalls from various states to display the kites of their culture. The beautiful and shining kites of Jodhpur, Rajasthan symbolized the colourful state while kites at the UP stall had pictures of the Royal History depicted on them. Every kite had a message.


The trees of India Gate lawns, were beautifully decorated with the strings of the kites (Firki) and the audience kept busy with passionately flying the kites in the open ground. Magic show organized for children was a major attraction in the evening. Delhi tourism had a stall distributing free reading material about the glorious History of the capital and the monuments standing tall with pride.

Cultural events trying to preserve our fading History is definitely a well-appreciated effort. We look forward to many such events which bind people to the fading past and rivet them to the roots. This was the first time ever, Delhi’s own Kite flying festival.
at November 19, 2011 No comments:
Email ThisBlogThis!Share to TwitterShare to FacebookShare to Pinterest
Labels: cultural fest, Delhi Tourism Board, India kite, kite fest, Kite flying, promote regional cultureq
Newer Posts Older Posts Home
Subscribe to: Posts (Atom)