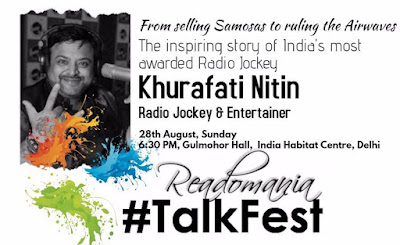 Readomania's talk fests are one its kind and sadly I have missed attending them all this while. I attended the 5th Talk Fest which was a crowd puller because of the speaker RJ Khurafati Nitin. The stage was set at India Habitat Center, Lodhi Road for Sunday, 28th Aug '16.

The interactive show intended to bring his inspiring struggle story to the public along with exciting gifts and giveaways. For me, the best giveaway were the rich learning lessons. Nitin who is a well known entertainer and is the most awarded Radio Jockey held the crowd with his great sense of humor amid the story of highs and lows of his life. 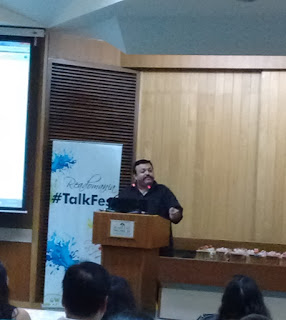 For those who did not know, Nitin's full name is Jonathan Philip Nitin Brady. Born to a lovely couple who came from different castes, Nitin himself is married to Sunita, a girl outside his religion. His words "Mere ghar mei poora Bhaarat basta hai" hence stands true to the core.

He began his career with All India Radio around 15 years ago. Gradually his career picked up when Radio as a medium started to became popular. Amid the golden period of success and fame he enjoyed, Nitin faced a sudden downfall in his career when he was left with no job and was financially broke. He bravely faced the tough depressing phase of life and decided to move on with something, if not radio. He started selling samosa and chole bhature from a little eating stall in Gurgaon. The difficult time continued for quite some time. The best part was the thorough support of his family with a special mention of his younger brother Raul who quit his job to support Nitin.

The RJ shared a touching video of Derek Redmond who injured his leg hamstring few meters before the finish line. Determined to finish the race, Redmond got up with the seething pain and limped on the track.  A man breaking security barriers came to Redmond to offer him his shoulder. It was his father who said "We will finish the race together". Father sun duo hand in hand walked the track with a limping and wailing Redmond, refusing to give up. His father let him walk the last few meters on his own, amid a crowd of 65,000 people cheering for both.

The purpose of sharing the video was to show two things; One, to never give up, Two, no matter what happens, your family will always support you. With such a valuable lesson and emotional visual, my eyes turned moist and throat choked. I am sure many felt the same.

Quoting his own example, he takes pride in telling how his family has been an anchor and built a strong support system for him.

To lighten the seriousness, Nitin played humorous prank call recordings in between. As he continued narrating his life journey, he shared his insights about a backup plan. Soon after his mother questioned and planted an idea of back up plan in life, Nitin with his brother Raul ventured into production house. He played one of the short films he has made which intends to create awareness on a deadly drugs named SMILES.


After Fever 104 FM hired him, Nitin convinced the management to start a show with his philanthropic philosophy. He has managed to spread the message to Delhi and successfully raised funds for acid attack victims facial surgery, AIDS patients and getting those people released from jail who couldn't afford bail. The stories behind the project again left my eyes welled up.

A big salute to this man with a heart of gold who touched and changed so many lives. He took a huge risk with this show which had many eyebrows raised. Nitin went by the philosophy that even if he fails to raise money for the needy, he wants to do something good. He wants to live in the hearts of people who would remember him as a good person after he dies. From pleading people for making way for ambulance to stay away from drugs, Nitin uses radio as the best CSR medium.

Very few celebs have such generous hearts. Nitin proved himself not only a good RJ but an excellent human being too. Such motivational talks strike so many chords within you.

The house was open for Q/A and he kept tossing gifts to the audience. As Nitin ended his energetic talk after an hour (where he spoke non stop), the crowd flocked to him for pictures. Husband and I took one too. The picture is hazy but the memories are crystal clear :-) 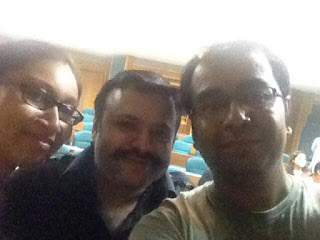 10 MUST DO'S TO TRAVEL WITHOUT ILL OR BAD HEALTH

There is a traveler within all of us. But how many manage to stay fit and healthy during and after the trip? Learning from my own experiences and a close brush with others, here are 10 must do's to travel in good shape and health.

1. Snack healthy - Yes I can feel the frowns. Trying local cuisines is on the to-do list of travelers.

But please do not ignore your health. You never know if contaminated ingredients/water or anything oily can make you ill during your tour. During my Jaipur trip in December few years ago, a friend fell seriously ill, only to be diagnosed with food poisoning. Oh boy, if only he could control himself from hogging at every food stall.

It is obvious to feel hungry and our nose just cant ignore the deep fried goodness, which ends up in eating pakodas/chips/samosas/vadaas. Advisable to carry a little snack pack with you. Roasted chana (black grams), almonds, peanuts & puffed rice mixture, digestive biscuits, dates, roasted sunflower & flax seeds are great options to pack in your baggage. They neither occupy much space in bags nor load you with cholesterol/risk of bad stomach. Also, packing these little treats can save you from hunger pangs if you get stuck in traffic or odd hours at night.

2. Walk- for the sake of good health, to keep heart healthy and cholesterol under control.
The shit loads of crazy food that you hogged also gets easily digested as you walk. The vitamin D deficient ones can soak up some sunny vitamin and get some relief from ortho pain. Walking with partner/group also bonds you well. Ditching taxis for local traveling is also good for the environment :-) Walking also gives you the opportunity to come close to nature and observe the local culture closely. And the best part is that walking costs nothing! Whosoever said best things in life are free, was absolutely right ! 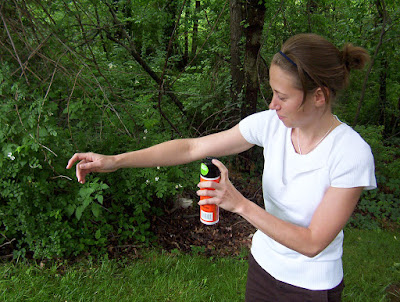 3. Carry mosquito repellent/ liquid- Since you don't want to be down with malaria/dengue or likely diseases, its better to be safe than sorry. Of course you don't need these in a hotel, but these protective measures prove to be handy, especially for the bag-packers. If you are driving a car, advisable to use mosquito spray and leaved it locked for few hours before you resume with your journey.

4. Hand sanitizer- That's basic hygiene, needless to explain.  Keep a bottle handy in your car/handbag/bagpack. You may need it any time! A small step towards prevention of health hazards isn't much of efforts. yeah?


5. Pack a stole/jacket/anything warm irrespective the weather of the place you travel to. I was stranded in the chilly weather of Dalhousie, Himachal Pradesh during my visit in April two years ago. Anticipating a warm weather, I did not carry anything warm apart from from a thin shawl. I almost contracted hypothermia, if I had not bought a sweater, which I got at a relatively higher price. In similar incidents in Darjeeling and Mussorie, had mom not tucked in light woollens for us, we may not have survived the chilly storm. Also, a stole or dupatta always helps to shield you from the sun, dust and sudden cold winds. Not heavy woolens always, but light weight ones would do the trick. 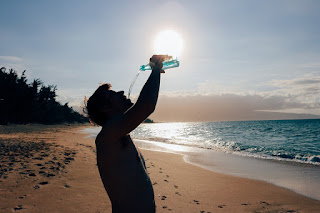 Often while travelling to cold places or in the excitement of travelling, we forget drinking water. By the time you feel thirsty, your body has already lost lot of water. Keep replenishing yourself with water at small intervals. It not only aids in digestion but also keeps toxins at bay and makes up for the minerals lost from body.

7. Scrub it away-
Change of weather shows on your skin. You obviously wont go out searching for a beauty parlor on your vacation. Get rid of your white heads, dead skin cells and black heads on your own. My travel kit always has a mild scrub so that I can exfoliate and keep my face clean on the go. You can also have cleansers with exfoliating beads. If you opt for home stay, ask for a thick paste of coarsely ground oatmeal or red pulses (masoor daal) to scrub away dullness from your face.

I carry a mild scrub from Vedic Collection.  Visit (https://vedic-collection.com/fresh-face/normalskin/facescrub) Made of almonds and organic ingredients, it exfoliates dead skin while maintaining moisture balance and keeping skin smooth.

8. Shoe up- During my recent trip to Dharamsala, I roamed the whole place in my flat sandals, least realizing I had invited pain for my legs. Avoid this trouble by wearing sports shoes. Always have sports shoes in your must-carry items while travelling, especially to hill stations. I prefer wearing shoes instead of packing them as that adds weight to luggage.  Avoid heels as much as you can, unless you are packing for a party or function. For beach vacation or water adventure, go for floaters or flip flops.

Since prevention is always better than cure, a smart traveler must carry a small first aid kit with basic items at-least. My kit usually has pain relieving balm or spray, tabs for digestion, pain killer, paracetamol, band aids and antiseptic liquid. Keep the kit within easy reach for obvious reasons. You never know it may be useful for others if in case you did not use. 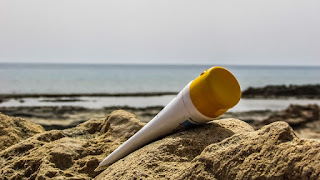 Happy sunny weather is good but the goodness does not come without tanning.
Soak up as much as sun you want but ensure applying sun tan lotion before stepping out. Sun blocks are NOT cosmetics but a protective measure to protect your skin from harmful UV rays that may cause sun burns, redness, rashes and ageing besides tanning. Highly recommended for beach vacations and before you take a dip in the glittering blue water of the pool. Chlorine used in pools to clean the water causes skin darkening. Use waterproof Sun blocks there.