What was common among the movies- Singham, Gangajal and Wanted? No, not the Khakhi uniform silly, but “One man against the corrupt political mechanism, trying to clean it”. Shanghai is on the similar line minus the khakhi uniform and attempt to set things right, till the second half at least. 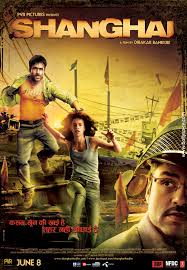 A political party in Bharatnagar begins a development phase to modernize the town and generate employment. The new township IBP which is supported by a party leader and CM of the state (played by Supriya Pathak) promotes the industrial development besides her chances to win the elections. On the other hand, a messiah of the common suffering man Dr. Ahmedi (essayed by Prosenjit Chatterjee) lands from the US to oppose the IBP movement, for the farmers and land owners who would lose their lands. (Remember a similar “Nano” incident a couple of years ago?) Minutes after addressing a ralley, Dr. Ahmedi is run over by a van. While the opposition tries to shut the case terming it an accident, his supporters (including Kalki) demand an inquiry for the attempt to his murder. In walks Krishnan, an honest IAS officer with a clean record, to investigate the case. The new developments during the enquiry leave him shocked. Sandwiched between responsibility and politics, much to the audience surprise, he chooses the former towards the end of the movie.

“Kasam khoon ki khaai hai, sheher nahi Shanghaai hai” may answer your question of the reason being the name of the movie. This is what the politicians promise to make of the state, if elected. No, the film has not been shot in Shangaai, as what many expect, going by the name. The promos look promising enough to create curiosity among the audience. But what happens when you see it on the big screen? Does it still hold you till the last scene? You experience witnessing brilliant performance though the pace is not engaging but slow. 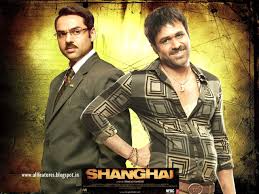 The first half of the movie is slower than the second half. The actors have portrayed their roles with great poise; even the small town goons wonderfully get noticed. Abhay Deol definitely deserves a big round of applause who has paid attention to every detail of his character. Be it his Madrasi accent, the grave expression on the face of an IAS officer during inquiry, the shock from the reality, the panicky look on being attacked, Deol outshines everybody. Kalki did not have much to offer besides her blank looks and wide open eyes. Did I miss Imraan Hashmi? Oh, he plays a porn movie cameraman and earns his living by shooting functions or selling pirated DVDs. Hashmi helps Kalki and Deol crack the case with a recorded tape. For the very first time, Hashmi grabs the lime light sans a single kissing scene! Surprised? Well, another round of applause for his complete desi make over with a pot belly and tobacco stained teeth. Farooq Sheikh plays his part like a cake walk.

The story might not be appealing; it’s been said and heard million times now. The audience is mature enough to sense the dirty political trash. Watch it for yet another intense power packed presentation by the actors. An admirable camera work and effective editing make Shanghaai flawless. Yeah flaws like Dengu Malaria do co-exist in the country, yet we are supposed to say “Bharat Mata ki Jai”. Isn’t it?

Book Review: Of course I love you, till I find someone better 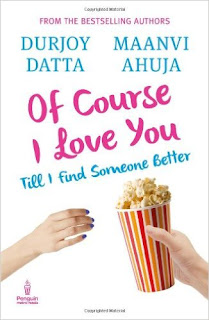 “Of course I love you...” is a story set in Delhi around the protagonist Debashish Roy, a boy next door and an engineering student of a prestigious college.  The not so bright Deb claims to have been in relationships for a number of times but never found “True Love”. Given his age, he is immature to understand true love or probably grows sick of relationships soon and longs to look for somebody new. While dating a cute Smriti, from a Medical College and satisfying his physical desires, he meets a bold and beautiful Avantika. Soon he finds himself getting attracted to her. In pursuit of true love this time, he ignores everything in his life, namely his best friends, Smriti, studies, CAT, job and makes life messy for himself, with Avantika leaving him towards the end of the story. Read on further to find out how he pulls himself out of the muddle which he had created for himself.

The story is not complicated, and you might just want to go with the flow. Lock your grey matter somewhere and take off your thinking caps, else it may annoy you. The authors have made an effort to pen down stories of college days, affairs, late night parties, behaviour of hostilities, so called relationships and the never-ending list of the youth’s desires, which may seem to be a replica of everybody’s college life. The climax will make you smile, for two reasons. One, it’s a happy ending like in Bollywood movies. Two, the tedious book ends, without creating a pressure on your minds!

The language is candid; most of the lingos are often heard in Delhi campuses. Since this is a book for the youth, or let’s say college teens, they would feel close to it.  Deb and Avantika look like “Today’s youth”.

Seems, all engineers are trying to clone Chetan Bhagat. Not even once do they think that excess of everything is bad.  At an affordable price of INR 100, this book claims to be a best seller with over 4,00,000 copies sold.
Read this novel if you don’t have anything else to read or if you think you miss your college days. Though the freshness is missing, yet a light hearted story would not be bad to kill few hours of your idle time.

Rating: 2/5
About the Authors: Durjoy Datta is a young alumnus of Delhi College of Engineering and has penned other novels like “Now that you are rich” and “She Broke Up, I Didn’t! ...I Just Kissed Someone Else!” for the youth. He has been critically appreciated for his dark humor and lucid writing style.
Manvi Ahuja:  The pretty Co Author of this best seller, is a graduate from SRCC and post graduated from IIM K.
at June 08, 2012 No comments:
Email ThisBlogThis!Share to TwitterShare to FacebookShare to Pinterest
Labels: book review, breakups, College going love story, Delhi University, Durjoy Dutta, Manvi Ahuja, youth

Book review- I too had a love story 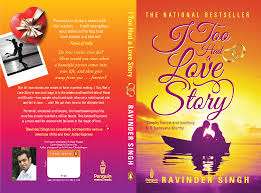 Four close friends meet few years after college life and discuss about their future for the first time. No, it wasn’t job, but about getting married to settle down. Influenced by this discussion, the protagonist Ravin registers on a matrimony portal and finds his soul mate Khushi. She is a pretty girl from a middle class family residing in Faridabad who has strong values imbedded within her. Khushi’s good looks and mature, polite behavior impresses Ravin. The latter is an IT professional at Infosys, who was brought up in a small town in Orissa and currently stays away from his parents in Bhubaneswar. The similarity in their respective professions and personal interests instantly creates a magical bonding between them. They gradually fall in love without having met each other. The love story sails smoothly, crossing the limits of caste, religion or distance. They decide to get married in the company of their supportive parents by their side, until one day, when an unfortunate incident changes their lives.

This is the story of “I too had a love story” by Ravinder Singh, another Engineering graduate and a budding writer. This novel was released in Dec 2008 and made its way to the hearts of the youth. The touching novel is still on the shelves and liked by many.

The book takes you through a series of sweet love and family bonding. But at the same time, it talks about the fact that all love stories do not have a happy ending. The title of the book is catchy enough to create interest in the readers. It justifies the love tale with a tragic finish. If you are in love or have been through a “Puppy love” affair, this would certainly appeal to you.

The simple everyday language void of complicated jargons adds to the flow of reading. Despite the fact that the story is conventional and predictable, with nothing new to offer, yet people with love in their hearts, would love it. There are neither twists n turns nor suspense to reveal, however, the feeling to be in love, the urge to hear each other’s voice, talking till late night, hurting unintentionally to apologize later, showing concern and whispering sweet nothings, dreaming to be together, making marriage plans and so on, pulls you into the depth of love. Even if you don’t like the story, you would definitely like the feeling to be in love.  You might find your eyes welled up at the end of the story.

Ravinder Singh might have written his own story which has been heard many times. “I too had a love story” is not a master piece of literary work; neither sets an example for new writers. However, the efforts to write such a sort are appreciated. Recommended as a one-time read, it is not for thriller fans certainly.
Book price: INR 100
Publisher: Srishti Publishers & Distributors
at June 07, 2012 No comments:
Email ThisBlogThis!Share to TwitterShare to FacebookShare to Pinterest
Labels: bestseller love story, book review, Matrimonial website, Ravinder Singh, Tragic love story
Newer Posts Older Posts Home
Subscribe to: Posts (Atom)