The Mesmerizing Festivals of Spain


I hail from the state of Rajasthan and hence have grown up amid bright colors. Is there any other place in India more vibrant and colorful than this princely state? I guess not. However, one destination abroad that breaks the norms and matches this “riot of colors” is undoubtedly Spain. The bespoke beauty of this country has always fascinated me; so much that I ended up visiting seven times. Trust me, each time was a different and new experience. The ministry of India tourism brought me on the panel of Indian-Spanish cultural exchange program and my endless journeys to Spain began in 2011. 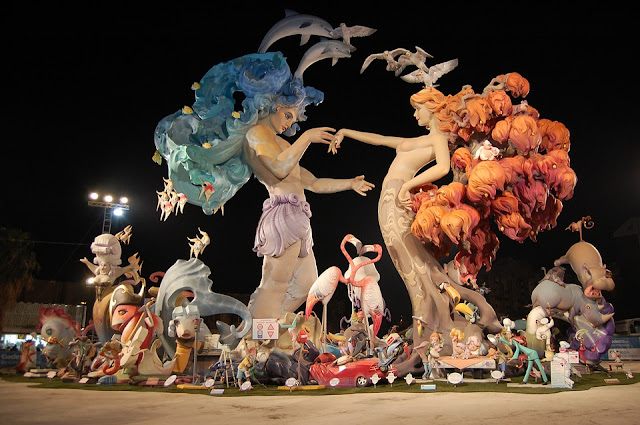 Being an important part of any culture, I observed Spanish festivals closely. My favorite? Woah, it’s difficult to pick one.

January is the time for Tamborrada, a tradition which started with mocking Napoleon's troops that had invaded San Sebastian in 1813. Hundreds of organizations and people participate in the exciting street festivals playing drums. The celebration also represents the union of citizens in pursuit of happiness.

During my visit to Tenerife in February, the Spanish carnival season was a cherry on cake. This celebration easily rivals the carnivals of Rio de Janeiro, Brazil where the streets transform into a sea of colourful processions. The extravagant costumes are not to be missed. The island was full of fun, colour, glitter and glamour, that filled my soul with so much joy. Spaniards really know how to enjoy life.

While every festival in Spain is full of energy and fun, Las Fallas de Valencia in March is larger than life. Visually one of the most spectacular Fiestas, the city inhabitants make giant paper mache figures representing notable people as well traditional figures. With work officially suspended, the figures are displayed in the city during the entire week of celebration before being burned down at one of the most amazing bonfires marking the end of the festival. I was mesmerized by the giant effigies and fire show.

My hands were full with celebratory mood and cultural knowledge and I started preparing to leave for India in April. But guess what? Festivals are never over in Spain. I was invited by my tour operator’s family to attend the Feria De Abril Fair in Seville. The fair lasts for two weeks, usually from the last week of April to mid-May.  What started as a cattle fair in 1847 is now a period of serious dancing, drinking, eating and socializing, with late night. From around midday until early evening - especially on Sunday, the first official day - Sevilla society parades around the fairground in carriages or on horseback. The sheer extent of the April Fair's spectacle felt extraordinary.

I left for India the following month while planning to return in the June next year. I was welcomed with lots of wine being poured on my head. No kidding. This is Haro Wine Festival whose origin can be traced back to the 13th century that started a dispute between two neighboring villages. The festival now sees people of all age groups throwing buckets loads of wine at friends and strangers with music playing in the backdrop. To my surprise, the once quaint town of Haro changed completely after sunset. Who would not enjoy throwing wine at people and watch some to drink from the same bucket? The excitement refused to die down and got etched in my memory forever.

July was relatively low for me in Spain because I was too scared of being run down by bulls. Thousands gather and run after the raging bulls at the San Fermin festival in Spain’s Pamplona. This fiesta gives the country of Spain a time to celebrate in honor of San Fermin, the tortured saint. Though I did not participate in the bull race, I did venture out in the evening to experience the parades and music shows. 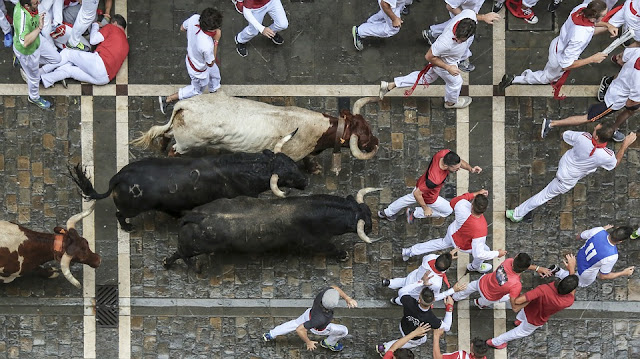 Come August, the town gets painted in red and crimson. Thanks to Zindagi Na Milegi Dobara for enlightening us. Though criticized for wasting tons of tomato crop, La Tomatina continues to attract people from all parts of the world. It is a super fun celebration with so much tempo and energy. What amazed me the most was how people throw tomatoes at each other like crazy yet behave so civilized.


My short stay sponsored by the ministry of tourism ended in August and I bid good bye to Spain that had filled my life with vibrant colors. I miss the festivities and excitement there. This is perhaps the only country besides India to have so many festivals and rituals. In case you are doing a research on cultures, without battling an eye, I’d suggest Spain. If you are looking for an agent for your visa application,  I'd advice BLS International without a doubt.

at November 25, 2019 No comments:
Email ThisBlogThis!Share to TwitterShare to FacebookShare to Pinterest
Labels: Festivals of Spain, Spain Tourism

Visa facilitation centers in India were enforced by the Government to ease the travel process and shrink the complications. The tourism industry thrived on these visa application agencies and our dependency on them multiplied. However, it came as a shocker for me that none of the core objectives have been met by most of the visa management companies, leaving customers upset, angry and hopeless. These instances only create bad memories and corrupt impression of the country’s most trusted establishments. Here is what I came across.

When it comes to travelling abroad, visa processing centers can give you real nightmares. From mismanaged crowd to impolite staff behavior, applying for visa is turning out to be the most unpleasant experience. I guess, a thorough research and good word of mouth may give you a real picture of the scenario. Well, I am still searching for alternatives and a way to not blindly rely on tall claims.

Have you ever experienced this before? Do you prefer the services of a visa processing company or arrange everything on your own? Do share in the comments section below.