The run for Vitamin E


We all have encountered bad health at some point in time among our family members or close ones. And most of the times these are outcome of health negligence on the pretext of ignorance. We clearly don't practice "prevention is better than cure".

Nutritionists and doctors, have always advised intake of balanced meals to compensate the loss of vitamins, minerals and other necessary ingredients required by the body. While calcium, protein and vitamin C or D are highly recommended by experts, there lies the lesser known but equally important Vitamin E. 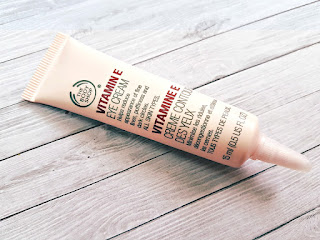 Until I started using under eye cream enriched with Vitamin E, I admit my ignorance about the same.
The eye cream helped to reduce puffiness and fine lines around my eyes. It was then I researched about the super benefits of Vitamin E.

Calcium or protein do not work in isolation. They essentially need vitamins and minerals to combine and together they provide goodness to human body. Hence why no food product is taken for a standalone benefit of particular vitamin/mineral. Vitamin E too stands in the same category. It is said to work the best with Vitamin C, as they support each other's antioxidant function and both control immune cell function.

Importance:
Vitamin E is extremely beneficial for hair, skin and eye health. The reason why anti-aging products are high on Vitamin E is that it disables the production of free radicals in tissues and protects cell membranes from oxidative damage.

When applied to the skin topically, vitamin E can reduce or aging in skin which is usually caused by UV light exposure (Sun) or suppression of immune system. Vitamin E helps increase the production of beneficial compounds in skin.
It also speeds up the skin’s natural repair systems and controls further damage. The antioxidant vitamin is proved to substantially reverse discoloration and wrinkles of skin. To be more precise, Vitamin E helps  to regulate retinol levels, which is essential for healthy skin. It is also key for healthy immune system and healthy eyes. Hence I choose skin creams with retinol.

Human body needs Vitamin E to boost immunity. It aids in fighting the invasion of bacteria and viruses.
Apart from the above  uses, Vitamin E is also used to treat diseases of heart and blood vessels like heart attack, chest pain, high blood pressure and hardening of arteries.

Deficiency of Vitamin E: may cause degeneration of retina causing blindness, muscle weakness and impairment of immune response.

It can also cause your hair to dry, hair fall leading to baldness, weak muscles, a very slow tissue healing, ataxia (identified with loss of full control of bodily movements) and leg cramps ( which I at times experience).

The down side:
Excess of everything is bad, so is Vitamin E. High doses of Vitamin E causes oxidation which damages cells and may increase the risk of cancer or mortality. Long term high doses of the vitamin leads to nausea, diarrhea or vision deficiencies.

Sources:
The daily recommended dietary allowance of Vitamin E for adults is 15 mg (22.4 International Units) which we can get from variety of sources. 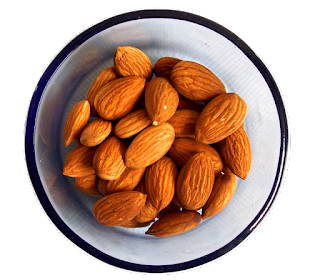 I was following the age old ritual, inculcated by mom, of consuming soaked almonds each morning. The world knows almonds are a rich source of dietary fiber, calcium and protein. But hardly one is aware of the presence of Vitamin E in good amount. (100 g almonds supply 26.2 mg Vitamin E.)
No wonder why almonds enriched hair oils promise strong and healthy hair.

Another high source of Vitamin E is sunflower seeds, 100 g of which contain 35.17 mg of the vitamin. Easily available in the market, add these seeds to your salad, sprouts, sandwich, upma or in your diet mixtures. 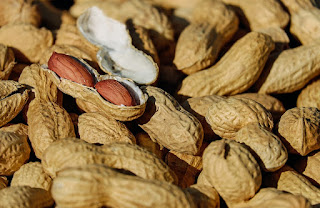 Available the whole year, we all love to have crunchy peanuts. A reservoir of healthy fat and protein, Vitamin E in peanuts constitute 20% of the nutrition value. These little nuts are good for heart health, excellent source of dietary fiber  and folate. 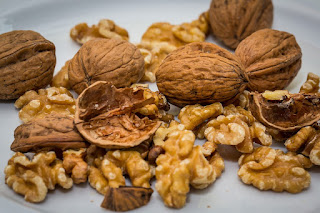 Talking about other healthy nuts, walnuts comes to our mind essentially because of high presence of manganese, protein, carbs and omega-6. Not only these, walnuts are a great source of Vitamin E too! Research proves, walnuts, compared to other nuts, contain high levels of Vitamin E called gamma-tocopherol which prevent heart diseases, cataract, Parkinson's disease and glaucoma.


Among all, my favorite has been raisins. While these tiny dry fruits are excellent source of calcium, instant energy and iron, 100 g of raisins also provide 0.12 mg of Vitamin E. Though this is roughly 1% of all nutrition content, it combines with iron for inhibition of blood clot.

Come winters and the market is flooded with leafy greens. Spinach tops the list. Not only spinach is high on iron, vitamin A, K, and calcium but also has traces of Vitamin E, dietary fiber and manganese. Apart from making paalak paneer, I add blanched spinach to all possible dishes. For example blanched spinach to poha or egg besan chilla. (100 g serving of eggs have 7% vitamin E).
For both these dishes, I blanch about a cup of spinach leaves and add to the pan while cooking.
. 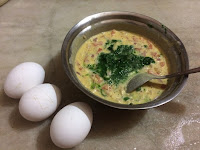 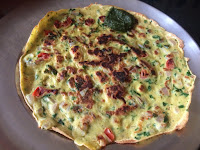 Rich in Vitamin C and E, tomatoes not only add tanginess to food but has immense health value. Apart from cooking, you can use tomato directly on skin. The seedy pulp which I do not use in cooking, I rub the same on my face and neck, let it dry for 15 minutes and wash off with cold water. Your skin absorbs the goodness of tomato directly giving a smooth texture and radiance to skin. It has helped me get a glow and rid of acne marks as well. I do this quick tomato facial before party makeup or when I have no time to visit parlor. Just takes 15 minutes and I am done! Yay.

Apart from the natural sources mentioned above, you can consume vitamin E supplements too. Evion is a pioneer brand for Vitamin E products. With a combination of Vitamin E with aloe vera, #Envion is India's number one selling cream. The brand also supplies supplements in form of capsules and tablets. To know more do visit   http://www.evion.co.in/.

This post is written for the #IndiBlogger campaign #TheABCofVitaminE by #Evion. 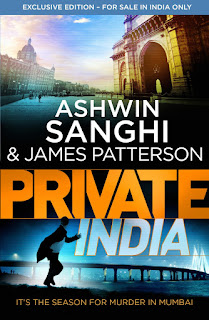 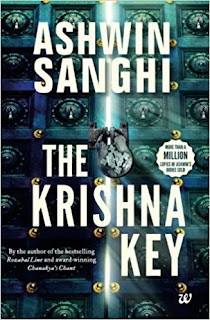 Though I met the 2017 reading challenge, the books that I read were little disappointing. Starting with James Patterson & Ashwin Sanghi's Private India, it was below average. It was poorly thought of plot that resembled some B grade movie. Where was the research and excitement which usually Ashwin's brings in his novels? Equally disappointing was The Krishna Key. It started on a good note, built the story, characters were strong but got sloppy as the story ended. Climax was dead. Not done Ashwin. I had high hopes from both the books since I adore your work.

Next disappointment was Binodini which is a product of Gurudev Tagore. I got my hands on the translated version randomly in a bookstore at a metro station. Oh boy, this was the most irritating book that I read. With due respect to Tagore, the Bengali version I am sure would be good, since it won several accolades. I guess the essence was lost in translation. Binodini was poorly translated which least captivated. Widow-remarriage, plight of a married lady, extra marital affair, a devastated mother, friendship, romance and all emotions fell apart with an extremely bad translation. 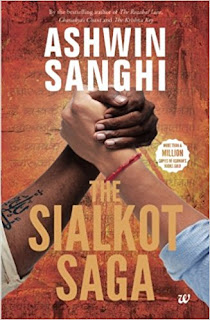 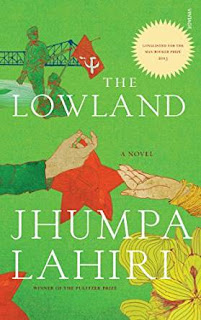 The books which held me till the end were The Lowland and The Sialkot Saga, not because they are my favourite authors but because the books had the essence of what the authors are good at. Tugging at emotions (Jhumpa Lahiri) and well-paced plot backed by superb research (Ashwin Sanghi) made the books to my top list of reads in 2017. While The Lowland was about two brothers one of whom chose to be a Naxalite, leaving his pregnant wife alone to the mercy of the cruel world. The elder brother comes to her rescue and marries her, against his parents' wish. The plot moves to Rhode Island is the U.S where they live as a married couple but never attached to each other. Desolate, hopelessly in love and complicated relationships- Jhumpa excels at writing on these.

The Sialkot Saga is a story woven pre-partition where two young boys separated in communal clash, are adopted by different families and grow up to be professional rivals to each other. Characters in different states of the country, imparts the feel of two different stories being narrated simultaneously until destiny brings them face to face for a never ending battle. This book is typical of Ashwin's style which I thoroughly loved. 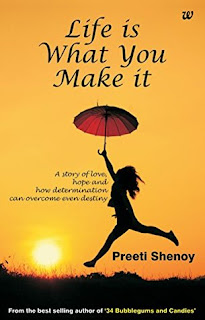 Preeti Shenoy's Life is What You Make It got  the 3rd place in my "good reads". A very good story indeed. I was impressed by the way Shenoy researched, brought in the angle of teen age love, career ambitions, clinical depression and seamlessly added conviction to the story. The characters seem real and every young person would be able to connect to this book. I want to read more of Shenoy’s work now. 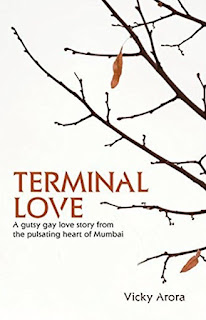 Terminal Love was an experiment. New author Vicky Arora tried touching upon the unusual story of gay love. The plot was well-thought of, but lacked expression. The story has the power to make you cry in the end, but this is one of the books which does not leave you "feeling good". Depressing climax but a good attempt at first novel. It takes guts to write on a bold topic and Arora partially succeeded. Only the plot needed to be a little stronger. 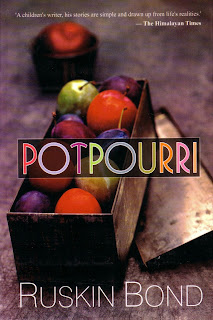 Potpourri by Ruskin Bond is a collection of short stories and each story left me with a smile on my face. I guess that's emblematic of an incredible author. Stories are of different genres and give moral learning too. Short and sweet. 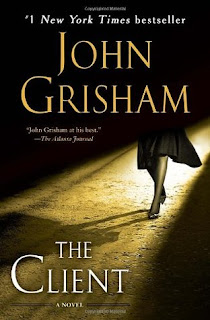 John Grisham's The Client has a unique plot but do not expect more than court room spectacle and lawyer turning into detective. The all's-well-that-ends-well plot has plenty of drama, action, violence and of course law theories. This book as better than his The Testament.